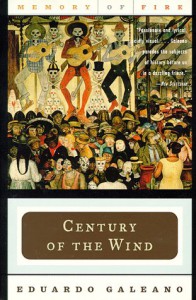 In 1977 a disheveled, reclusive Elvis Presley fired pistols at his six TV sets in Graceland while, a continent away, Brazil’s military dictatorship banned Picasso’s erotic prints and the U.S. Declaration of Independence. In this Uruguayan journalist’s epic tapestry, stitched together from hundreds of historical cameos, the destinies of North and South America are darkly linked by more than drug trafficking, CIA intrusions, cultural imperialism and cynical exploitation. As Galeano replays the obscenities and horrors of modern history, he lays bare the fractured soul of Latin America, a civilization deformed by its unequal relationship with the U.S. Hopping from Thomas Edison’s workshop in New Jersey to General Pinochet’s bloodbath in Chile, Galeano sums up a century ravaged by progress.