Treatise on Living for the Younger Generations 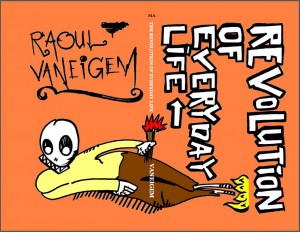 ‘People who talk about revolution and class struggle without referring explicitly to everyday life, without understanding what is subversive about love and what is positive in the refusal of constraints, such people have a corpse in their mouths.’

One of the classic situationist texts, rumored to have helped inspire the uprising in Paris in May of 1968. Where Marx has missed out on the last 100 years of capitalist development, while many philosophers, academics and artistic specialist have cornered, neutralized and commodified subversive and revolutionary ideas, and where union and student representatives have come to represent the bosses and the administration – Vaneigem blasts them all away. The revolutionary subject is potentially anyone now: