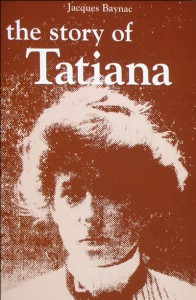 In the shadow of the Jungfrau’s peak that towers above Interlaken, Switzerland, Tatiana Leontiev carried out her act. Historian Jacques Baynac recounts the life of russian revolutionary before and after 1906, when she assassinated the person she believed was a tsarist minister.