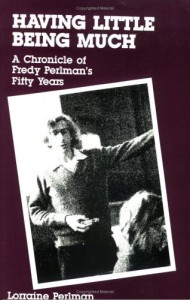 A memoir with photos written by Fredy’s companion of 27 years. Fredy’s life began in Czechoslavakia in 1934 and ended in Detroit in 1985. In those fifty years he lived on three continents and incorporated into his written works experience with graphic arts, politics, communal enterprises, historical research, music, printing, journalism, education and publishing. Fredy taught in (and eventually resigned from) Kalamazoo, was active in France in May, 1968, and helped found and run Black and Red Books. Works by Fredy include Worker-Student Action Committees, France, May ’68; The Continuing Appeal of Nationalism; Letters of Insurgents; Anti-Semitism and the Beirut Pogrom; Against His-Story, Against Leviathan; and The Strait.