Some Brief flowerings of Life in the Middle Ages,

the Renaissance and, Incidentally, Our Own Time 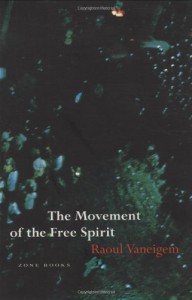 A historical reflection on the ways religious and economic forces have shaped Western culture. Within this broad frame, Vaneigem examines the heretical and millenarian movements that challenged social and ecclesiastical authority in Europe from the 1200s into the 1500s. A joy to read, this provides a vivid portrayal of the radical opposition presented by these movements to the imperatives of an emerging market-based economy, and he evokes crucial historical parallels with other anti-systemic rebellions throughout the history of the West. Not only resistance to the power of the State and Church, but the immensely creative invention of new forms of love, sexuality, community, and exchange. Vaneigem also compares heretical groups to each – which ones denounce pleasure (reactionary in Vaneigem’s analysis) and which ones embrace it (liberatory).

Excellent companion book with the reactionary Pursuit of the Millennium: Revolutionary Millenarians and Mystical Anarchists of the Middle Ages.