The Biography of Ezra Haywood 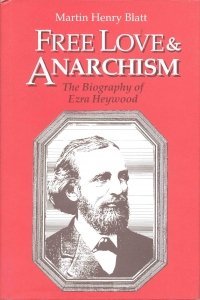 Sexual behavior was a hot and often dangerous topic for conversation in Victorian America. Anyone advocating women’s rights, birth control, or ‘free love’ could find himself counting the hours in a prison cell. Enter three amazing characters in the nineteenth-century ‘free love’ debate:

Ezra Heywood, a tireless pamphleteer, trained in ministry, who held advanced views on almost everything: the war-making state, abolition, labor reform, and ‘woman’s slavery.’ He reveled in uncompromising statements and personal sacrifice in the service of liberty.

Angela Heywood, whose earthy prose was a joyous ode to sexuality, explicit language, and phallic symbolism.

Anthony Comstock, a man so determined to stamp out the distribution of obscene materials through the mail that he worked for thirty-three years, without pay, as a special agent of the U.S. Post Office. Personally vindictive against “libertines,” he is said to have boasted of the number of persons he had driven to suicide. With the backing of the Young Men’s Christian Association, vice suppression societies and the federal government, Comstock was endowed with a salary and both the moral and legal authority to hound the Heywoods for two decades, beginning in the mid-1870s.