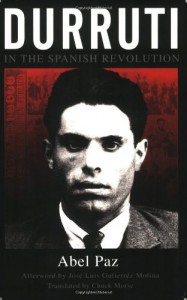 The most thorough account of Buenaventuera Durruti’s life and spain in the tumultuous and rowdy years of the 1920-1930s in English. Paz, who fought in the spanish revolution as a teenager, seamlessly weaves intimate biographical details of Durruti’s life—his progression from factory worker and father to bank robber, political exile and, eventually, revolutionary leader—with extensive historical background, behind-the-scenes governmental intrigue, and blow-by-blow accounts of major battles and urban guerrilla warfare. Written with a thorough and sympathetic understanding of the anarchist ideals that motivated Durruti, this is an amazing and exhaustive study of an incredible man and his life-long fight against totalitarianism in both its capitalist and Stalinist forms.